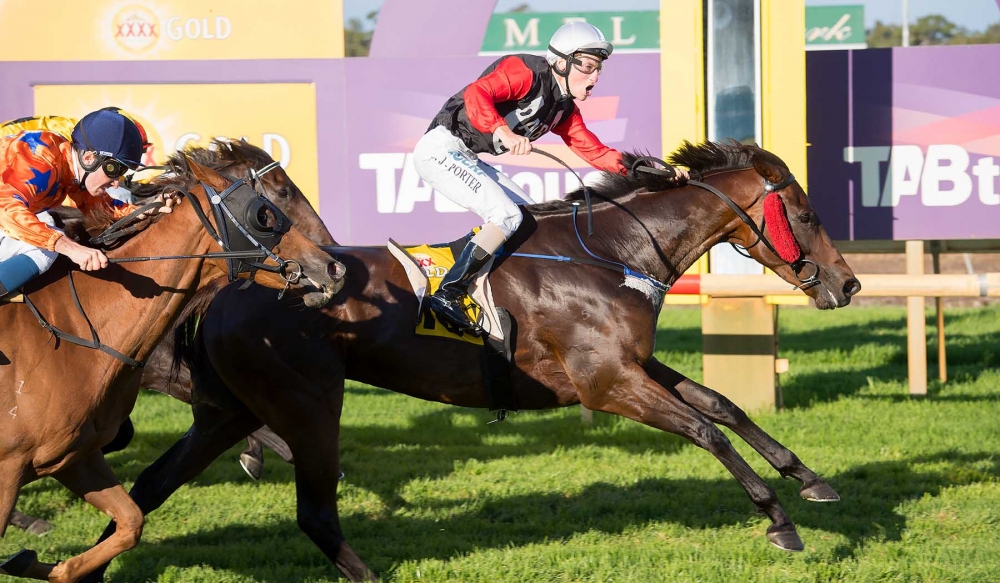 Burger Time’s boilover in Sunday’s Listed XXXX Gold Bunbury Cup (2000m) was not only a sentimental and career-best win for trainer Aaron Bazeley, but also a much-needed lift for a family who has experienced its fair share of adversity in recent years.

It was a boilover result in the 2019 XXXX Gold-Bunbury Cup with $41 chance Burger Time coming from last with @clint_jporter on board to salute. It was former jockey/now trainer Aaron Bazeley's biggest success in racing. pic.twitter.com/FfpmKL77EV

Bazeley, his former-jockey wife Misty and their two daughters, Courtney, 15, and Jasmine, 12, had their lives changed after Misty suffered a career-ending fall in a race at Geraldton on October 10, 2016.

Misty suffered bleeding on the brain in the accident and, after attempting a comeback to race riding the following spring, further health complications forced racing authorities to revoke her jockey licence permanently.

“She was still having seizures at that point and none of the neurologists picked up that she had epilepsy,” Bazeley said.

“It wasn’t until she went to one of the insurance claim doctors and he insisted that she be tested for epilepsy.

“They found it after she had already been back riding.

“It was brought on from the fall as the bleeding on the brain formed a scar and she got it through that.”

Misty has had to face a series of battles since the fall and, more recently, had her driver’s licence suspended until new medication is able to control her seizures.

Misty Bazeley might not be down as the trainer for Burger Time but she knows more about the #BunburyCup winner than most…#TheRacesWA pic.twitter.com/GZpm52MSkf

Bazeley’s training operation has slowed to have only five horses in work at the moment, with a further 10 horses spelling at the family’s self-built Serpentine property, as they adapt to the new challenges they have been forced to tackle.

“With Misty having her injury, we’ve had to scale back,” Bazeley said.

“It’s a lot more on my plate, driving the kids around to netball and so forth, so the horses have had to take a bit of a back seat while we get through this period.

“There’s been a lot of changes and we’ve really prioritised what’s important and what’s not.”

Born and bred in Bridgetown, an hour’s drive south of Bunbury, Bazeley considered the Bunbury racecourse his home track growing up.

Despite having no family connection to racing, he developed the bug for the sport after spending his school holidays at Bunbury’s Punchbowl Caravan Park, situated not far from the local racetrack, and would often attend race meetings.

As an aspiring jockey at the age of 11 but not knowing how to gain a start in the racing industry, Bazeley made an unorthodox move to seek assistance.

“I wrote letters to champion jockey Rod Kemp and Lisa Harris, who was the leading apprentice at the time, because there was no internet back in those days,” he said.

“Rod was at the top of his game at that stage, but he wrote straight back to me within a week.

“Then I ended up spending a bit of time working for some trainers in Bunbury.”

Fast-forward a few years to 1990 and Bazeley, by that stage a young apprentice jockey, had his first race-ride at Northam aboard a Cameron Bell-trained gelding named Sweet Glow.

Initially indentured to trainer Paul Jordan, Bazeley also spent periods of time under the tutelage of Ted Martinovich and Frank Maynard before completing the final two years of his apprenticeship under Stan Bates.

“As a professional jockey, I finished around 1996 when I got too heavy,” Aaron said.

“I did my last stint in Broome for a season when I knew the writing was on the wall for the riding and my weight was going up.

“After I finished riding, Porky Graham got me up to Kalgoorlie to ride trackwork for him and I did that for a couple of years.”

Whilst also working as a delivery driver for local trainers Glenn and Joanne Forrest’s company, Goldfields Bearings, Bazeley decided to take out a trainer’s licence himself.

“It wasn’t high on my agenda originally but, while I was riding trackwork and bumming around for a couple of years, it grew on me,” Bazeley said.

“I got into that in 2002 and have been doing that and the horses ever since.

“They seem to work really well together.”

After meeting Misty at the Kalgoorlie races during her early jockey days almost two decades ago, the pair soon struck up a relationship and Misty made the move to the Goldfields once she completed her apprenticeship under Alan Mathews.

Now the licensee and co-owner of an Elders Real Estate franchise in Kwinana, Bazeley and his family opted for a tree change in 2013 and he has been juggling his profession with his racehorse training at the family’s property ever since.

“Being a country boy, I always wanted a farm and it was something that was always in the back of my mind,” he said.

“It’s taken a lot of hard work, it was nothing when we bought it, it wasn’t even a horse property.

“We took out kilometres of ring-lock fencing and pulled-out posts and we basically just had a blank canvas and have designed it to how we wanted it.

“It’s still not finished but we’re getting there.”

It was an emotional win for the connections of the long-shot Burger Time in today’s #BunburyCup! #TheRacesWA pic.twitter.com/O50PQ7K0Bo

Sunday’s Bunbury Cup win by Burger Time notched up a career-best highlight for Bazeley and was made even more special by the fact that the managing owner, who found the Numerous Times five-year-old, has been with Bazeley from the beginning of his training career.

“Richard Hill has been with me since I started,” Bazeley said.

“He was the instigator of getting the horse and he went in one of my first horses with me, Jashar Boy, who went within a neck of taking out a Hannans Handicap.”

Burger Time, originally a leased horse until the leasing group took up an option-to-purchase clause and bought him outright for $30,000 almost two years ago, has paid his connections back fruitfully.

The gelding has won four of his 28 race starts to date, as well as placing a further five times, with earnings of $129,365.

Bazeley applauded his wife’s work and faith in the horse and says it’s a deserved reward at a difficult time.

“It’s as much for Misty as for me because she does everything with this horse,” Bazeley said.

“They let her ride the odd one at the track and at home for her own mental health because, if they just took everything off her, she would be doing it even tougher.”

Despite being the $41 second-biggest outsider of Sunday’s 13-horse Bunbury Cup field, Burger Time and rider Clint Johnston-Porter made their move four-wide and without cover from the 1000m mark and sustained a long run before hitting the front with 50m to go.

The pair pulled away over the concluding stages to beat He’s A Parker ($8.50) by three-quarters-of-a-length, with Cappo D’Oro ($5.50) a further long-head away in third place.

“I was actually getting pretty confident when he took off,” Bazeley said.

“I know he was four-deep, but whenever he’s been put into the race like that he just doesn’t stop and keeps going.

“I didn’t want to confuse Clint with too many instructions, but I was adamant that I didn’t care where he was and I just wanted him to be hitting the front at the top of the straight or within striking distance.

“The key to him is flowing into it and momentum, he can’t be checked or eased back.”

Burger Time was having his second run back following a seven-and-a-half-week let-up and Bazeley praised the recommendation of jockey Jarrad Noske for encouraging him to nominate the five-year-old for the Bunbury Cup.

“Jarrad planted the seed three or four runs back,” he said.

“He said to not go to the Perth Cup, which we never even had on the radar anyway, but he’s always really liked the horse and thought he would go really well in the Bunbury and Pinjarra cups.

“That was the idea, once we freshened him up, and we decided to have a go.”

The bold move paid off and, after recording his previous win in a modest Class Two event at York four months earlier, Bazeley now has himself a Listed winner.

“I thought he had it in him, but I didn’t know if he was quite there yet, so it was a little bit of a surprise.

“I knew he was good the day he won his maiden.

“I know it was only a maiden, but if you watch the replay, Hally took off seven and eight-deep from the 800m and he won going away from them.

“I thought ‘holy crap’ and then, after the race when I checked his heart-rate, it was only 92.

“I honestly think his best racing days are in front of him, too, because he’s a real slowy and he’s just starting to come together now.”

By Michael Heaton via www.rwwa.com.au