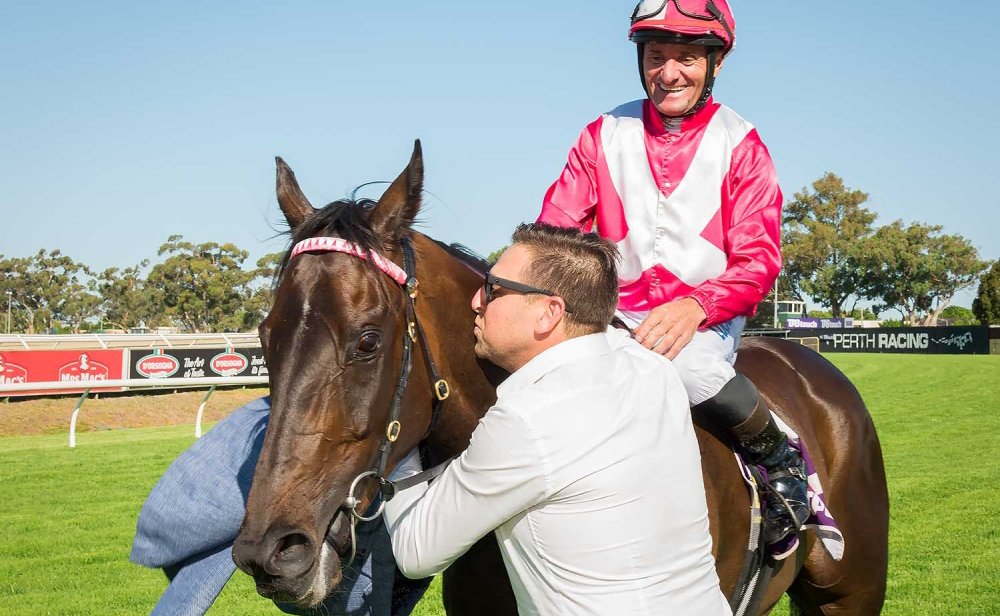 After two planned east coast campaigns were shelved, Star Exhibit will finally have his second-up run in this Sunday’s Bull & Bush Tavern Cup (2219m) at Bunbury.

Owner Bob Peters, together with trainer Adam Durrant, had hoped to run the dual Perth Cup winner in a Group 3 race in Sydney last week, but elected to target Sunday’s Listed feature.

The gelding will shoulder the top-weight of 62kg in the $100,000 event, while each of his seven rivals have 54kg, in what shapes as one of the biggest tests of his career to date.

William Pike returns from an eight meeting suspension to take the ride on Star Exhibit this week, who will have his first start since winning the Detonator Stakes (1800m) last month.

Peters said the seven-year-old had progressed well since the Detonator Stakes win and was intrigued to see how he would go carrying the big weight.

“That’s the big question, if he can carry the weight,” he told The Races WA.

“It’s made for a funny race with all the other horses on the minimum.

“We are hoping that his class shows, but it’s hard to know what to expect.”

Six of Star Exhibit’s seven rivals come through the Bunbury Cup on March 10, including the winner of the feature event Burger Time.

Meanwhile, Celebrity Dream’s decorated racing career will start to wind down when she lines up in Saturday’s Listed Grandstand Cup (1500m) at Ascot.

The six-year-old, a winner of the Group 3 La Trice Classic (1800m) earlier this year, produced an improved performance last start when placed fourth in the Bunbury Stakes on March 6.

Following the Grandstand Cup, the consistent mare will likely have her final two starts in the Marjorie Charleson Classic (1200m) and Sheila Gwynne Classic (1400m) on April 6 and 19 respectively.

Peters said he wanted to see Celebrity Dream finish off well in preparation for the two fillies and mares races next month.

“If she could be finishing off well, that would be nice,” he said.

“It was not a bad run at Bunbury and I thought she finished off well there.

“She’s probably better suited in those mares races, but it would’ve been a long time between runs if I waited for those races.”

Tellem We’re Comin has already received plenty of support in the Grandstand Cup and is a $3.40 favourite with TABtouch, ahead of Bunbury Stakes winner Achernar Star ($3.50).

Celebrity Dream is rated an $8 chance.

Daniel and Ben Pearce will saddle up Pushin’ Shapes in the Grandstand Cup, with the stable expecting a forward showing second-up.

“We sent him around in the Bunbury Stakes as a bit of a blow out,” Dan Pearce told TABradio.

“We’ll certainly be looking to put him into the race.”

Meanwhile, Peters said it was a difficult decision to enter State Solicitor in the 2019 Magic Millions Perth Autumn Thoroughbred Sale.

“I’ve made no secret that I think he’s the best sprinter we’ve ever had,” he said.

The Bull & Bush Tavern Cup gets underway at 4.20 on Sunday, while the Grandstand Cup jumps at 4.05 on Saturday.